So, when you’re single and people think you need to meet a man, for some reason they often recommend taking a cooking class.  Are cooking schools modern-day matchmakers? Or, perhaps my cooking is just so bad that my friends are jumping on any opportunity to not have to eat another lasagna dinner.

And the cooking schools people recommend are REALLY expensive! I could go to a fancy restaurant for cheaper than that and not have to do any of the work myself!

But, I would like to learn to cook better. Well, actually, I’d like to be able to have more fun cooking my dinners for one (grilled cheese again, madame?).  So, I’ve taken a couple of classes at a cheaper cooking class (thank you, night school!). They were … okay. Chefs were great; other students were mostly in couples and not really friendly. Let’s just say it was a lot like cooking for myself at home. Kinda solitary.

But last Christmas some of my friends pooled their money and gave me a gift certificate for one of those schools that everyone had been recommending to me. One of those places that I would never have spent my own money on. A place where people recommended to me that I sign up for the “single’s night” classes. Something I equate to being forced to compete in a cross between a beauty pageant and Valentine’s Day at school where you put a brown paper bag on your desk and have everyone see how popular you were.

So, yeah, I’d rather gouge my eye out with a spoon than sign up for that. Although, I suppose I might learn how to delicately sauté my eye and serve it with a side of kale chips. (side note: the “women’s” part of the singles night class was sold out for months. The “gentlemen’s” side? LOTS of space!).

But, browsing through the course list I came across a class where they butcher a hind of beef and teach you where all the different cuts of steak come from. And, then you learn to cook several dishes – including beef carpaccio and steak!  Perfect for me! I have never understood different cuts of meat or how to cook them. I have a BBQ on my patio that a friend bought and used once (they used it, not me). It has sat there for two years gradually rusting away.

I signed up, survived the epic battle with anxiety on the night of the class, and went. It was so much fun!  I met some great people (men and women), had great conversations, learned about cuts of meat, cooked three amazing dishes (yes, my sliders won third prize, thank you very much!), came home and fell into a beef coma.

Maybe you’re way ahead of me on this lesson, dear reader, but I’ll go there anyway. The difference? I went to the class for myself. Even though several friends upon hearing that I had signed up made the very helpful comment, “maybe you’ll meet a man!”

I didn’t. But, I did learn how to cook an amazing steak. And I’m pretty happy with that. 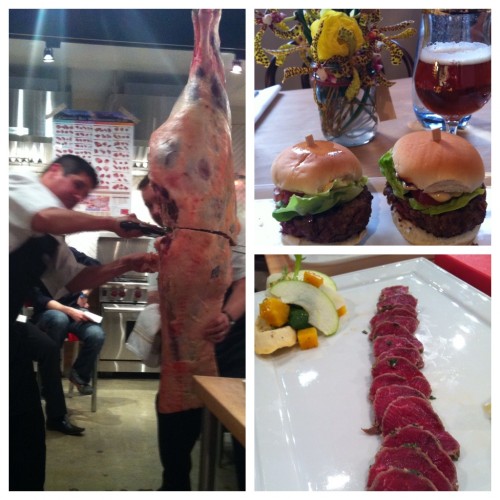