I spent the weekend away with some wonderful women at a cabin on one of the Gulf Islands in B.C.  On Sunday, we hiked along a path that ended up at the top of a bluff overlooking a narrow passageway between our island and the next. The currents through this narrow passage are fast and there was a bunch of kayakers taking a class and shooting the rapid waters. Most of them headed right into the current, whooping as they hit the white water and were picked up and carried by the currents.

And then there was that one kayaker. The one who hung back and was back paddling at the top of the rapids to keep from heading into them. Back paddling but going nowhere due to the current.  Oh yeah, I thought, I SO get that feeling. Seeing the hard path ahead and not wanting to move forward, even as I am slowly pulled towards the rocks and waves.

Also watching the kayaker, one of my dear friends who was sitting next to me said, “there’s no way out but through”.

Ain’t that the truth! There’s no way out but through …

There are so many things in life that I have tried to avoid doing and feeling because they would stir the waters. Keeping silent to avoid conflict, not saying no for fear that people won’t like me, taking risks that might make me look stupid, being vulnerable in case my heart gets broken, admitting when I’m hurt or angry, numbing out with food so I don’t feel the loneliness and the pain and the sadness, letting failure stop me from trying again.  Frantically back paddling and ending up stuck in one place.

But, those things are really part of life. And, there is no way to get out of the pain and hurt but to head right through them. To take risks, love deeply, be yourself, speak your truth, pick yourself up after a failure and move forward armed with what you learned. Head into the rapids and paddle like crazy.

Not an easy thing to do when the pain is so sharp that you think you can’t breathe. When “one day at a time” turns into “just the next 10 minutes” or “just get up and make it to the shower” or “just wait to cry until you’re out of the grocery store”.

I keep waiting to “get over” the pain.  To be back to the way I was before the hurt happened.  But, I will never be what I was before. I have changed and been changed by what I have learned about myself and my world by these events.  But, by heading through the pain and hurt I can slowly moving past it.

And, as hard as it is to head into the turbulent churning of emotions, it’s also the only way we get to experience the thrill of the ride and to whoop with joy. To be in the current of life and not stuck in an eddy.

And, that’s what that kayaker did, too. Headed through the rapids, paddling like crazy, hopefully enjoying the ride, and then relaxing in the calmer ocean on the other side.  I’m planning to do the same. 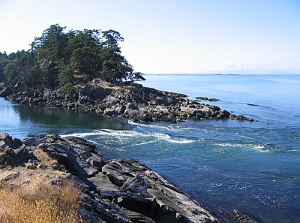 1 thought on “No way out but through”