Today I read this awesome blog post – a message to a fat girl running.

I’ll wait while you go and read it.

Thing is, I was that fat girl. Well, not THAT one, but you know what I mean. When I started running I only ran at night in the dark. I kept to the back streets and back alleys so no one would see me. Not a safe thing to do but it felt safer than the imagined (or otherwise) judgements of the other runners at the track. Or the people on the sidewalk walking their dogs. Or the people driving by in their cars.

Once, in a running clinic, the volunteer clinic leader yelled at me in front of everyone because he thought I was too far ahead of the group. I was too embarrassed and mortified to tell him that I was not AHEAD of the group but that some people in the group were about to lap me because I was so far BEHIND!

I never went back to that clinic again.

But I did not stop running and I did find other clinics.

I am not a fast runner. I do not look like a Nike ad. Or an inspirational Pinterest image. My face gets red and I sweat. I bitch about the hills. I mostly focus on putting one foot in front of the other. When it gets too hard I walk for a bit until I feel ready to run again. I love/hate running with friends because I always worry I am holding them back even though they have helped me make it up some pretty big hills!

But I do love running. I love moving my body. I love how it releases my stress and anger and worry. I love that as my body exercises, so does my mind. Roaming through thoughts and ideas and processing my feelings and problems until I feel centred again. I have sorted out many thorny issues while running. All to a great soundtrack of my favourite songs.

I used to worry about how slow I was. How “not good” at running I was. I don’t any more thanks to a woman from one of my running clinics. I don’t know her name but I am ever grateful to her.  One day at the beginning of the run, as I was worrying about if I could keep up with the front of the group (hell, even the middle of the group!) I heard the woman behind me say, “I like running behind you. You keep such a nice steady pace. ” I think I could have hugged her. Me? With my own steady pace?

So, that’s how I am trying to take life. I do not need to compare myself or my race to anyone else’s. While I don’t need to care what anyone thinks, I will surround myself with people who support me and don’t expect me to be anywhere else than exactly where I am. And, I just keep going at my own steady pace, one step at a time, one foot in front of the other, one day at a time. 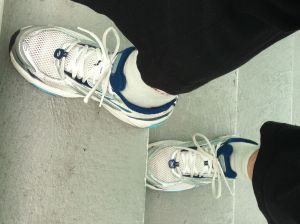 3 thoughts on “On pace for a great finish”