After a wonderful trip to Hot Springs Cove while in Tofino, my sister and I decided to also head out for some bear watching with Jamie’s Whaling Station .

I have always loved bears –  black bears, grizzlies, polar bears. Bears seem to me a symbol of strength, of protection, of connection to the land. And, there is a lesson in hibernation, of rest and reflection.

As opposed to zipping along in a zodiac looking for whales, bear watching involves a covered boat and a slow cruise along the low tide zone. The bears will come out of the woods to the intertidal zone, turn over rocks and snack on rock crabs. Our instructions were, “watch for a moving black rock”.

When we spotted a bear, we all tried to be really quiet until we could see if the bear was comfortable with our presence or not. These bears have very few predators and are generally not afraid of people. There are no roads into this area of Vancouver Island so humans have managed not to encroach on bear territory too much.

The bears in this area are very healthy, as evidenced by their black shiny coats. There is an abundance of food – grasses, berries, rock crab, salmon – so they are pretty large for black bears and may live a little longer than the normal 10 year average. In this day of humans damaging wild habitat, that was nice to hear.

Our first bear we saw was a Momma with a cub. Then, we saw two other bears each on their own.  Female bears will have between 1 and 5 cubs. They are impregnated by mating with different males. The female stores the fertilized eggs and then at the end of the season, before hibernating, her body decides how many eggs to implant and gestate, depending on how much salmon she has eaten (aka how many cubs her body can support). Cool, huh? 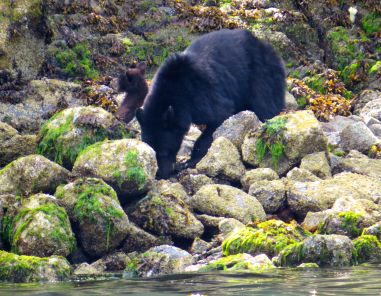 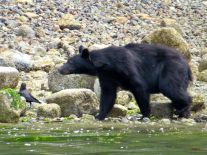 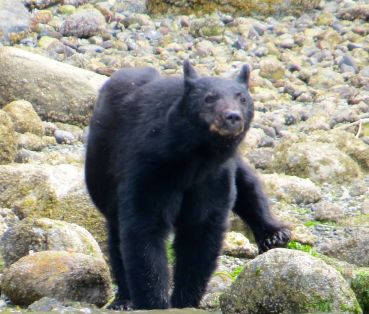 Got some video of the Momma and cub and of one of the solitary bears; not an easy job with a zoom lens and a moving boat!!!

In addition to the black bears, we saw a bunch of sea lions and seals. Sea lions and seals also look like rocks on the shore; but they blend in more and don’t move as much! I know it’s anthropomorphizing them but they always seem to be smiling and friendly. And, I love they way they sit with their heads up and their tail fins up!  The seals and sea lions are resting on the rocks staying out of the way of hungry orca whales until the tides rise again.

Altogether, a fantastic outing. When I was a kid, my parents used to stop at the dump to drop off garbage as we left our cottage. There were often bears there and while I loved seeing them, it made me sad to see them in the garbage. It was so much better to see these amazing, majestic animals in their natural habitat and looking so healthy. 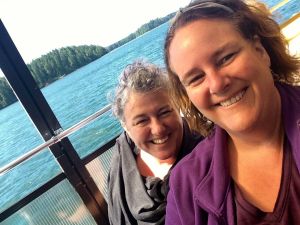