The kind of heat that requires sightseeing in the morning, bobbing around the pool or ocean in the afternoon. Followed by an afternoon siesta and a long shower before a late dinner.   We sensibly followed this hot weather schedule.

So, one morning we headed over to Hemingway House.

Disclaimer – I did not take this picture. For some reason (likely because we were in a big line behind a stone wall) I missed taking a photo of the house!

Ernest Hemingway lived here from 1931 to 1939 with his second of four wives, Pauline.  He wrote in the mornings, fished in the afternoons and drank in the evenings. Hmm, replace writing with sight-seeing and we may have been following a Hemingway schedule!

The house was originally built in 1851 by Asa Tift, a marine architect and salvage wrecker, in a Spanish colonial estate style, I always think of Hemingway as an old bearded guy, but he was young when he lived here.  He wrote many of his most famous stories here, including To Have and Have Not and Snows of Kilimanjaro. Not Old Man and the Sea, though. He wrote that at his next home, in Cuba. 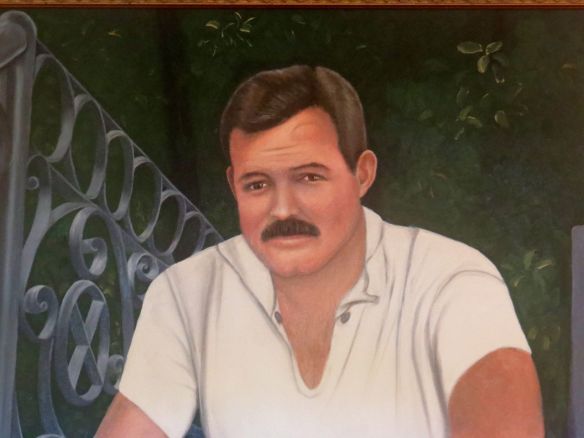 The home is also the domain of several dozen cats, many of them six-toed, descendents of the original six-toed cat on the property named Snowball.  Hemingway had rescued an old urinal from a bar, which horrified Pauline, but the gardener came to the rescue and made it into a nice fountain and drinking place for the cats.

The cats seem pretty used to tourists and posed graciously for pictures. This first one is called Duke Ellington. Not sure what the one on the table was called.

Our guide suggested that the urinal / feline drinking fountain was payback to Pauline, who had spent $20,000 (equivalent in 2013 to $330,000) to have a pool built for Hemingway while he was away at the Spanish Civil War. When Hemingway returned, he was reportedly unpleasantly surprised by the cost, and exclaimed: “Well, you might as well have my last cent.” This penny is embedded in concrete today near the pool.

The bedroom included this chair, which was Hemingway’s favourite travel chair. It folds up and had handles, perfect for him to take to the bull fights and other places. Actually a Spanish birthing chair, our guide reported that it caused much laughter amongst the Spanish bull-fight fans when Hemingway showed up with it.  It came with a matching midwife’s chair.

Apparently, when Pauline arrived she was appalled at the tacky ceiling fans and had them all removed and replaced with chandeliers. Not sure the guides who show the throngs of visitors through the place appreciated the lack of air and extra heat! But, since a lot of them were Murano glass, I enjoyed them! 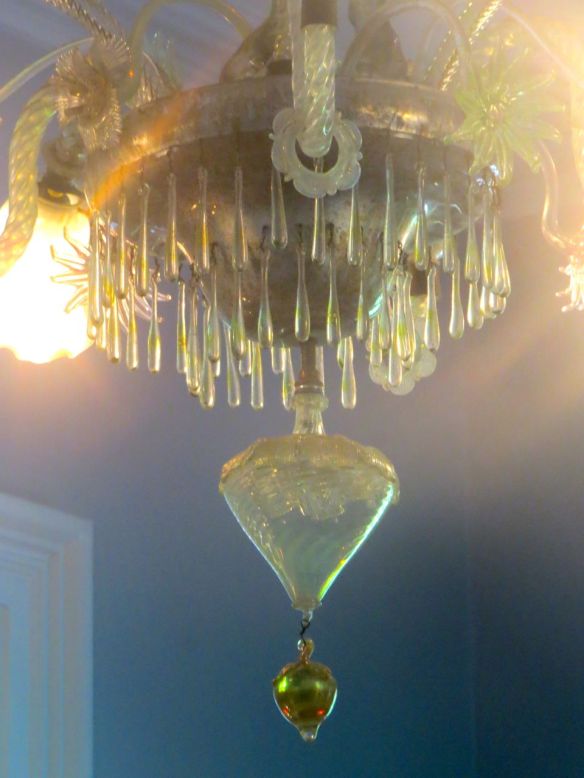 Lastly, a shot of the lovely brickwork. A bit of Baltimore and my pretty vacation toes.