It’s Word of the Year time again!  For the past 8 years I have selected a word to guide my year, rather than trying to set resolutions in January. I only have a record of 5 of those words, since I wasn’t blogging before that and I, uh, can’t find a record of my word for those years.

Somehow, my resolutions always failed. But, a word for the year can’t fail. It just unfolds with its gentle influence and takes you places that teach and illuminate.

When I picked release as my word last year, I had the strongest feeling that there was a big release on it’s way in April. I thought that my word might not last the whole year, but I knew I needed it.

Sure enough, by April I had lost my job – laid off due to budget cuts – and realized the final release  and healing as I passed the 5yr milestone mark of saying goodbye to a particularly painful relationship. My birthday is also in April and I took the opportunity to treat myself to a four hour Kaya Kalpa – an Ayurvedic treatment of rejuvenation.

This was my image for release for last year and by April I felt like the rope had been cut and  I was free to fly.  And so, gradually a new word appeared – jump in – and off I went. I jumped in and negotiated my severance agreement to make it work for me. I jumped into some consulting work and began to explore the possibility of running my own business. I jumped in to my glassblowing, committing to at leas one session per week and learning new techniques (marbles! cane!).  And then, in October, I jumped into a new job … one that works with my consulting so I can do both.

Altogether, I was off work for 6 months last year. And, that chance to take a breather taught me so much about what I want for my life. I’ve never had 6 months off of school/work before. Instead of different puzzle pieces …. paid work, volunteer work, creative pursuits, spirituality, friends … it gave me a chance to see the bigger picture. Weekends versus week days lost their distinction and the days became about what I wanted to do. I got out more for walks and bike rides and found myself eating better and being more present in each moment. Less drama and more peace. 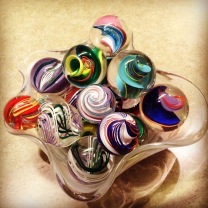 In the process of searching for a new job and considering self-employment, I spent a lot of time asking myself what kind of life I wanted to create for myself. And this lead me to my word for this year … co-create.

In the business sense, co-creation is described as “management initiative, or form of economic strategy, that brings different parties together (for instance, a company and a group of customers), in order to jointly produce a mutually valued outcome.” That seems to fit my consulting aims perfectly. To work with clients to jointly produce valuable results.

In a spiritual sense, “co-creation happens naturally whenever your soul or inner knowing inspires you to take action and follow your passion or pursue your life purpose.” That is what I want to do in creating my life. To be spiritually connected so while I am taking action to bring about my dreams and aspirations, I am doing that in partnership with the Universe/Divine/Creator/Higher Self. I like the term inner knowing … it implies a lack of ego and a sense of compassion and empathy in decision-making.

So, this is 2017 … co-creating my life’s purpose in partnership with my inner knowing.

1 thought on “Co-creating my life”