Today is the Sun Run in Vancouver. One of the biggest fun 10K “races” in the world.  It’s raining and I’m thankful that I don’t have to brave the crowds downtown. And while the weeks of physio have resulted in a green light to run again after injuring my knee it’ll be awhile before I am back to 10K. If ever.

I first ran the Sun Run five years ago.  I wrote this piece afterwards but I’ve never shared it. Mostly because it is linked to my issues with food; which I rarely talk about publicly. Today seems like a good day to push through the fear and be proud of my story.

On April 20, 2008 I ran 10km in the Vancouver Sun Run. One of 59,100 participants. Maybe they all have stories of how they ended up there early on a cold Sunday morning. This is mine.

When I reached out for help in the fall of 2006 I was in a deep well of pain and hopelessness, looking up at a sliver of sky with no idea how to climb out. The food was no longer helping me cope with life and I was unhappy and in despair. With just over two years to go to my 40th birthday, I looked ahead to that milestone with dread and panic. I was barely managing my life now at halfway through. How would I ever manage the next 40 years – if I even had that long?

Gradually, as I began to find the help I needed, I began to have hope again. As I let go of the physical and emotional weight, I began to believe that I could actively live the life I wanted to live, rather than only dreaming about it.

I remembered how much I used to love to run as a child – the sense of freedom, of motion, of feeling how alive my body was.  I had dreamt through my 30’s of running the Sun Run the year I turned 40 in April, 2009.

I began to think I could make my running dream come true as well.  Having not run for over 20 years, I thought I’d start trying at 39, just in case I “failed” and needed a second try to make it.

It took me 3 days to sign up for the Learn to Run clinic at my local community centre. Three days of feeling the fear of potential failure, three days of berating myself for not doing it and three days of trying to be gentle and encouraging with myself rather than harshly self-judgmental.

The first night of the clinic, a friend had to “talk me in” as I headed to class – scared, nervous and unsure of myself. I worried that I would be the slowest person, that I wouldn’t be able to do it, that the clinic leaders wouldn’t want to stay at the back of the pack with me, that others would judge and think that I shouldn’t be there. I worried about how I looked, what I was wearing, what I sounded like as I was running and whether anyone would want to run with me and be my friend.  Somehow, I made it through the first night.

In between weekly classes, I ran twice during the week on my own. I ran at night in the dark so that no one could see me. I kept to the back streets and off the main roads so that other runners and car drivers wouldn’t look at me. But, I kept running and I kept going to class.

One night, about 6 weeks into the clinic, I was really struggling with the group run. I had a cold and as I huffed and puffed along with all my fears and worries weighing me down, I just wanted to quit. To give up and not have to work so hard.

But, that night, in the sky overhead, there was a rare and awe-inspiring sight. A total eclipse of the moon. While we were running, the clouds had dispersed and I had a beautiful view of the full moon as it gradually turned red and darkened into the eclipse. A full moon is a time of energy full and rich with potential. And a lunar eclipse marks a period of profound transformational change that in the past, was viewed with fear.

With that realization, I took that giant bundle of fear and worry and self-hatred that was weighing me down and left it at the edge of the road and ran onward both lighter and freer. I ran for me, for the joy of running and moving my body, for my health and because I wanted to make this dream – and all my dreams – reality.

A few weeks later, a woman in the running clinic said to me, “I love running behind you, you set such a steady pace.” Surprised, and not realizing that anyone was actually behind me, I replied, “I just concentrate on putting one foot in front of the other, one step at a time.”

And at that moment, I realized that my method, which had lead to running success, was equally applicable to all the aspects of my life. Transformational change happens one small step at a time at its own pace. It is my journey, and it happens in my own time and speed and rhythm.

Last night at the BC Lion’s game I had the privilege of seeing Geroy Simon break the CFL’s all time receiving record. Which means, he’s run and caught the ball a lot.  A really lot.

It was a great night. As he came closer and closer to breaking the record, the excitement grew with each pass that headed his way. And, when he caught the one that broke the record, the place went nuts. Cheering and clapping, everyone on their feet, fireworks, media scrum, a presentation, t-shirts for sale. You name it.

So, as I sat there trying to understand the speeches over the loud-speaker in BC Place (yeah, gave up on that) and pondering if I wanted to buy a t-shirt (probably not) I got to considering such an achievement.

But second, in achieving his “fireworks” moment, Geroy had to show up for the last 10 years and play consistently every single game. He had to run and catch the ball, over and over again, regardless of the playing conditions, whether the team was winning or losing, through aching muscles and whatever personal shit he was going on in his life. In the past 10 seasons, he’s missed only 3 games due to injuries.

So here’s where it gets personal. I think that sometimes I am a “fireworks” person. I dream of the moment of success – running effortlessly up hill, wearing a size 6 dress, winning “employee of the year”, paying all my bills with money leftover for savings, eaten my low carb lots of veggies food every day, having a “plus one” for every wedding. You know, accolades that validate me as perfect.

Which seems to me a good path to take if you want to drop the ball but clearly not if you want to catch it and run with it.  In fact, trying to be perfect seems to me to be like expecting to score by running into the end zone without even looking at the ball, never mind catching it. Kind of missing the point(s).

But when I have the kind of consistency and effort that Geroy has at MY game; when I show up every day and do my work including morning meditation, evening journalling, apologizing when I make mistakes, practicing authenticity, allowing myself to be vulnerable and looking after my side of the street (um, and ONLY my side) then I get my “fireworks” moments.

Fireworks moments like being happy with who I am. Having rich and connected relationships with wonderful friends and my family. Going to a job where my work is meaningful. Financial security. A safe home. Recovery from my food addiction. Acceptance of my imperfect self. 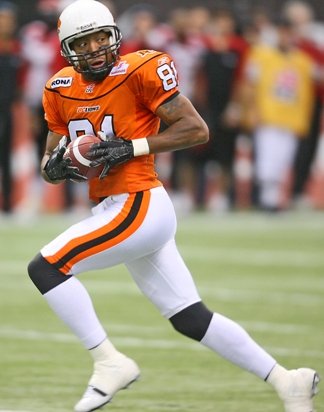